Guantánamo is Not Going Anywhere under Trump

There were 41 prisoners held at the Guantánamo Bay detention facility on the day that Donald Trump became US president in January 2017. That number has since fallen by one, to forty. Twenty eight of the remaining prisoners face no charges, including five who have been cleared for release. Only a handful currently face prosecution before military commissions. Over the past 18 years, there have been more prisoner deaths than convictions at Guantánamo Bay.

Nonetheless, these are the “bad dudes” of Trump’s “cartoonish” pre-election threat to “load up” Guantánamo. Along with his pre- and post-election comments on waterboarding, they reveal how little Trump knows about Guantánamo or the lawfulness of torture and arbitrary detention.

Trump has been unequivocal about keeping Guantánamo open, even if the $13 million per prisoner per annum cost of doing that, in his own words, is “crazy”. In January 2018, Trump signed an executive order repealing Barack Obama’s 2009 executive order to close Guantánamo, to keep it open indefinitely. He also ordered then Defence Secretary Jim Mattis to examine, within 90 days, US military defence policy and the possibility of transferring new prisoners there. At the end of that period, the White House reported that Mattis had sent it guidance on the matter but offered no details whereas Mattis told journalists “right now I’m not working that issue”. There has been no further information since. 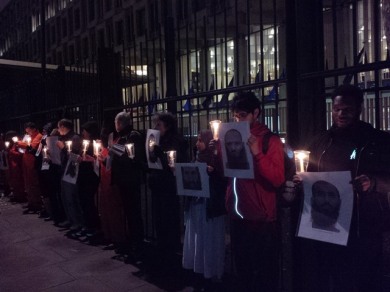 Solidarity with the remaining prisoners in London, 2018

In a bid for freedom, in January 2018, on the sixteenth anniversary of Guantánamo opening, the Center for Constitutional Rights (CCR) and others initiated a major challenge to the ongoing detention of at least eleven prisoners by the Trump administration, arguing that the “petitioners’ perpetual detentions violate the Constitution and the Authorization for Use of Military Force (AUMF) and are undergirded by the president’s executive hubris and anti-Muslim animus”.

The case, which was heard in July 2018, is still ongoing, with an appeal recently heard in the case of one of the petitioners, Abdul Razak Ali. The decision in this case “could impact any future attempt to bring detainees to the detention center and torture site”. Furthermore, it was once more confirmed that the AUMF provides the basis for indefinite detention at Guantánamo and remains effective as long as operations “continue against Al Qaeda and the Taliban in Afghanistan”, meaning that the US “could hold them for 100 years if the conflict lasts 100 years.”, according to government lawyers.

On the other hand, the AUMF complicates Trump’s plans to load up Guantánamo with prisoners from other theatres of war, such as alleged ISIS fighters currently held in north-western Syria. Oft-repeated plans to send non-US ISIS fighters to Guantánamo have been ruled out and could prove impossible to implement given that there is no basis, like the AUMF, to hold them indefinitely.

One test of this was the case of a US-Saudi citizen held indefinitely in Iraq by the US military without access to lawyers until the American Civil Liberties Union (ACLU) was successfully able to ensure the man’s constitutional right to a lawyer and prevented his release to either Saudi Arabia or Syria. Eventually released to a safe third country in October 2018, the Trump administration nonetheless backed out of presenting its arguments on its power to hold him indefinitely at a hearing in June 2018. Thus, the “court never did rule on the underlying legality of our client’s military detention”. The US since prosecutes its own ISIS members through the federal court system.

The alternative Trump has presented to Guantánamo detention for ISIS fighters is releasing them. Such a threat, aimed particularly at European states refusing to repatriate alleged foreign fighters, demonstrates that there is no legal basis for Guantánamo detention.

More importantly, it demonstrates that neither the US, nor its allies, some suggesting opening their own Guantánamo-style detention centres to deal with returnees from Syria, have learned anything in the past 18 years. Arbitrary indefinite detention in the many forms it has assumed across the world since 2002 takes place simply as a way of avoiding due process and other legal rights.

Trump may not have loaded up Guantánamo with bad dudes or brought back torture simply because he does not have to. The US’ Syrian allies, the Syrian Democratic Forces (SDF) are holding thousands of men, women and children in north-western Syria, some for more than four years. Many have been transferred to Iraq, a state known for its use of torture and unfair trials, for further indefinite detention and dubious trial, with the potential of becoming a new Guantánamo.

Seven Frenchmen, transferred from Syria to Iraq in February 2019, reportedly at the French’s government request, currently face the death penalty following allegations of torture and an unfair trial. Iraq is reported to have said it will commute the death sentences in return for the payment of millions of euros, effectively holding the men hostage.

They are not alone. Iraq has already tried hundreds of other foreign male and female suspects, imposing the death penalty and life sentences. Women sentenced often have their children detained with them in overcrowded, inhumane prisons. Iraq is reported to have offered to prosecute and detain prisoners for the US-led coalition in return for a fee of millions of dollars, even though it has no jurisdiction to do so.

As with Trump’s predecessors, the alleged recidivism of former Guantánamo prisoners has provided fuel to justify the US’ never-ending war efforts, with at least three reports of former Guantánamo prisoners killed or fighting against the US in the weeks following Trump’s inauguration. While justice remains out of the reach of prisoners at Guantánamo Bay and others held in Iraq and Syria, Trump has pardoned some US military personnel accused of or convicted of murder in the theatre of war. He has also promoted a number of torture advocates and given top jobs to individuals involved in the CIA torture programme and defending indefinite detention at Guantánamo.

Although Guantánamo has lost none of its value as a key symbol of lawlessness and injustice in the twenty first century, it has gone from being a symbol to a motif in almost two decades of existence. Buoyed by the anti-Muslim and anti-immigrant sentiment it fomented under his predecessors George Bush and Barack Obama, Guantánamo has helped to promote and justify Trump’s position on the treatment of foreign nationals in the US, particularly coming from Muslim countries, and the expansion of indefinite detention and abuse of asylum seekers and refugees at the borders and in immigration detention centres. Ultimately, Guantánamo’s existence is an attack on the rule of law and due process rights.

In spite of numerous delays and setbacks, the most drama at Guantánamo in the past three years has taken place at the military commissions. With the suspension of hearings in the death penalty case of Abd Al Nashiri, accused of pre-9/11 attacks on a US navy vessel in the Gulf of Aden in 2000, of over two years and 28 months of decisions by the previous judge in the case being set aside due to a conflict of interest, and January 2021 set as the trial date for five men accused of involvement in the 9/11 attacks, procedural problems and the use of torture evidence, and continued official secrecy surrounding it, continue to pose major problem and expose Guantánamo “justice” for the farce it is.

Guantánamo needs to close not just for the 40 men who remain but for the 740 men who have been released. Without charge or sentence, detention at Guantánamo is a life sentence and many still suffer from stigma and discrimination as a result of having been held there, along with the psychological and mental anguish of the torture and ill treatment they suffered years after release.

With an ageing and ailing population, Guantánamo is going nowhere under Trump unless the US electorate give him a reason to act. With the current possibility of yet another war, the argument over the past 18 years that indefinite detention and torture make the world a safer place has not borne out and funds that could be better used on public services are instead being used to hold people indefinitely for no actual reason.

Public apathy and indifference remains the main reasons that Guantánamo Bay has remained open for the past eighteen years. Barack Obama’s failure to close Guantánamo by 2010 and the low prisoner population have ensured the issue has fallen under the radar. In spite of the complicity of other states and the fact that all the prisoners are non-US citizens, closing Guantánamo is now seen almost exclusively as a US issue. The US electorate thus has to ensure that closing Guantánamo is once again an election issue, for the sheer cost of it, if for no other reason. Other countries must also push Trump to close Guantánamo.